The main graphics players, VizRT, Chyron have been around for some years now and have been continually expanding their domain to cover MAM/CMS storage at the backend, streaming from live productions, live interaction and statistics as they happen at the events and usually require a large amount of state of the art hardware to build the systems. It is sometimes difficult to separate out just the graphics from this increasing complexity and cost. The new NVG1 box from VizRT and Newtek may come at a price point that matches Brainstorm/Aston, Ventuz, or Ross Xpression, but it is still more expensive than smaller companies are able to manage. Luckily, the power of modern hardware is raising the quality level and abilities of lower end character generator software. 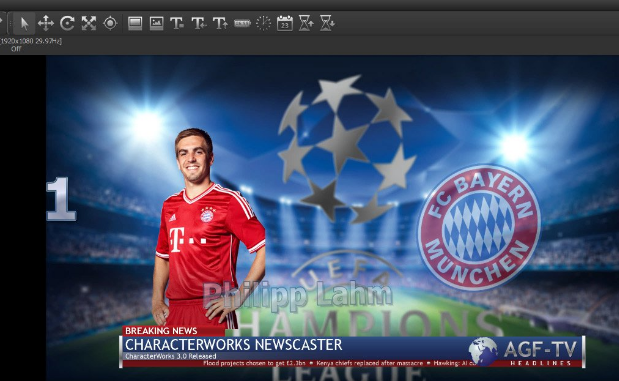 There is increasing demand for the simple straps and score bugs in the budget production area, where the income is never large enough to cover the cost of these higher end graphics systems. These productions only need a few specific templates and they don’t need the user to carry around some behemoth of a graphics PC filled with video input/output cards. There are a few systems around that are adequate for stills and very simple graphics – Wirecast, Tricaster LiveText or even the built-in graphics in the popular vMix software vision mixer. Simple styles may be added with image selections, font choices and color variations. These give basic facilities for a few hundred pounds, but they don’t add that high-end gloss to the production and they are quite manual in their operation.

There are a number of breakout boxes now that will house video and nVidia cards and give external video complete with the alpha channels. However, these are not cheap. As an alternative, I’ve been using the Dell laptops with Thunderbolt 3 output to the Blackmagic UltraStudio HD Mini box to give a key and fill output. The Aja Io XT is a similar box if they are your favoured manufacturer. Having built-in nVidia chips in these laptops, there is enough power to create this level of graphic and update them in real time. With some packages, the graphics may be cached before playout so the laptop just needs plenty of memory to be practical.

So, on to the graphics packages. The three that I have looked at recently vary in price from free to a couple of thousand pounds. Caspar is free open source software that has been around for some time. Its developers have good broadcast experience and understand the problems involved. It is transitioning now from its Flash-based history to the more modern HTML based browser type graphics, so it is becoming much more widely used. Not much comes with the software apart from a fairly basic playout structure and an API, so it will take some work to put together your particular graphics brand, but if you have a web developer it can be done without too much programming. HTML rendering may not be the best in the world, but comprehensive score clocks, animated straps and tables may be produced with a little effort. Some companies such as Streamstar and SimplyLive are packaging up a set of Caspar templates for particular sports. It makes their systems more complete as it gives the customer a quick entry point to a functional system.

In my experience, the system needs to be flexible enough to add extra facilities. There is always another graphic that the producer must have; an extra player stat or an animation for their particular sport. People looking for facilities similar to the top end machines are using pre-rendered movies or image sequences to get similar highlights and flares and more movement while the graphic is on air and some particle effects to bring them on and fly them off. Graphics are built in a similar way to the layering in AfterEffects and similar packages, with some of the layers being for text and images that can be pushed or pulled into the system automatically.

NewBlueFx have come from a background of video effects plug-ins for Adobe and other software, so they are used to producing fine quality animations and they have used this rendering power to start producing score bugs and straps. The flares and the particles can be built in 3D effects to give high quality graphics, although some of the more complex effects need to be cached before playout. More recently they have been starting to automate their graphics, initially from Sportzcast scorebots giving scores from live matches. They have expanded on this, so their latest Titler Pro Broadcast version is adding further automation to bring in XML and JSON feeds, data from spreadsheets, twitter and rss feeds. Initially easy to use, with a large directory of examples, there is the power to connect to fully automated playout systems. They can also drive their graphics from a socket based web interface, so again a little web building experience will add to their functionality.

CharacterWorks is a similar package that has been around for a while. It has a similar layered structure for the graphics and has the ability to take in all the usual image and movie types that I would normally use, so taking in graphics that have been pre-rendered to get the quality is no problem at all. It can also take in values from spreadsheets, data feeds or databases and has some scripting abilities to customize the graphics according to the data. It has the ability to package playback commands into an interface for the operator, adding a button layout for a particular sport or event. This makes operating much less error prone. This interface can then be driven from within other packages such as the vMix vision mixer, or the TriCaster macro system. They also have a cheaper designer licence to keep costs down.

Being able to take a laptop and a couple of boxes onto a plane to get to an event makes life so much easier. Very few moving parts or cards that can rattle loose on the way to an outside broadcast event. Everything via thunderbolt 3 to fill and key for the mixer desk.

It may become even easier with NDI, Newtek’s standard for compressed video over the network. Everyone seems to have a version ready for IBC so laying graphics over a live stream should do away with the need for any hardware. We would have a reasonably powerful PC running mixer software such as vMix and then the result would be channeled to a streamed output port, live to the web. With the latest NDI Connect, the user has the ability to avoid all the streams going to all the PCs so there is some control of the bandwidth on the network. Also, once we are all in the software domain, we have the benefit that there are no parts of the system dependent on resolution; no video cards tuned to NTSC or PAL. We can run in 4k at any time we have the bandwidth.

I hope that was a useful summary. If you have some experience of other packages at this level, do let me know in the comments below.